In this article we have compiled a list of the best small car deals; all coming in at below £10,000. Their dinky dimensions make them perfect for getting around town and squeezing into tight parking spots, while their ease of use, low insurance costs and efficient engines make them ideal for learners and new drivers, too.

Once upon a time the cars at the lowest end of the affordability scale were extremely basic with very paltry standard equipment but thankfully, that’s no longer the case. Most of the cars here feature a host of kit as standard and have good safety records, too.

We have tried to include a variety of offers: some put the most emphasis on value for money, while others have more space, equipment or are more practical than the others. The best, however, are the ones that combine all these facets.

Keep reading to find out the best small car deals for under £10,000.

The brilliantly practical Hyundai i10 was always going to appear on this list. With five doors and a decent sized boot as standard it is also pretty well kitted out too. All models (except the entry level S) are fitted with the luxuries of air conditioning and electric windows.

The recommended model here has to be the SE with the aforementioned air-con and front electric windows, it also comes with cruise control, power heated folding door mirrors and rear electric windows. Though it does break the budget (by £75).

Not only is it a bargain price in the first place, it has extremely low running costs too which make it great for a first car. The 1.0-litre engines return more than 60mpg on average and will only cost £20 a year to tax. Factor in a brilliant five-year/unlimited-mileage warranty and you’ve got yourself a fantastic cheap car.

Even though the Skoda Citigo is just one of a trio of great Volkswagen Group city cars, we still prefer the Skoda Citigo over the SEAT Mii and Volkswagen up despite the fact that they’re mechanically identical. It’s a close call but the Citigo takes the crown by being very slightly better value. Further to this, Skoda is rated higher on customer satisfaction that both VW and SEAT.

Other than the above, the Citigo is nearly identical to the other two (under the bonnet, anyway). So ultimately you get yourself a 251-litre boot, fuel economy of around 60mpg and cheap road tax. You also get a five-star Euro NCAP crash-test score which, in this class, isn’t always a given.

If you’re after one of the best city cars available right now, then you simply must give the SEAT Mii serious consideration. We chose the Skoda in preference but there are a multitude of reasons why you would opt for the SEAT; it is definitely has the most distinctive look with its angular headlights and trapezoidal grille.

And if we’re basing purely on cost the SEAT is marginally cheaper.

Other than that, it’s pretty much identical to the Citigo. Running costs will be the same, as will practicality. One slight disappointment with all three VW Group city cars is their rather meagre three-year/60,000-mile warranty. You get more with a Hyundai i10 (five years) or Kia Picanto (seven years).

The Renault Twingo is a city car with a quirky edge. Unlike conventional rivals such as the Hyundai i10, Kia Picanto and Skoda Citigo, the Twingo has its engine at the back, under the boot floor. As a result, it’s a bit shorter than most city cars and its front wheels can turn at a sharper angle. This gives a very tight turning circle, making the Twingo brilliantly agile and easy to park as well as being very spacious inside.

If there was more storage under the bonnet it will would definitely rate higher, but the boot is still a reasonable size. Out of the two available petrol engines– a turbocharged 0.9-litre and a naturally aspirated 1.0-litre – we prefer the smaller turbo engine, but unfortunately, it’s outside our budget here. The 1.0-litre is still a good engine, however, offering decent performance and low running costs.

Sadly, the Fiat Panda it is often the bridesmaid to the widely popular Fiat 500’s wedding. However, the Fiat Panda is a more practical alternative to its dinky Fiat 500 sibling not to mention a much cheaper alternative. Fiat hopes the Panda’s mix of practicality, space, low running costs, value-for-money and charm prove attractive enough to tempt some people away from the competition.

However, the latest model was launched back in 2012, and the more recent competitor models are starting to show the fiat panda for the old girl she is.

The Fiat Panda boasts light steering and a soft suspension meaning it is manoeuvres easily around town and bumpy roads wont give you whiplash. If you’re looking for a good amount of headroom combined with practicality then the Panda’s boxy shape offers this in oodles! The down side is that it can be quite susceptible to getting blown around in the wind.

With Kia and Hyundai being sister brands the Picanto is nearly mechanically identical to the Hyundai 10 at the top of the list. Hyundai takes a slight edge in the modern category. However, the Picanto is a serious contender for a City Car with it being very spacious all round, particularly in the back and it’s standard equipment is also impressive. The Hyundai is a slightly nicer drive and a little more cost effective but the Picanto pulls it back with a fantastic seven-year/100,000-mile warranty. However, the boot is minuscule and the Kia feels a little bit out of its comfort zone on the motorway.

In the interest of affordability there is no way the Dacia Sandero can be overlooked. If price is the biggest driver this one is for you – but read on to find just what your money actual buys you (it’s not a lot!)

Prices for the Dacia Sandero hatchback start at less than £6,000, although for that, you don’t even get a stereo, let alone central locking or electric windows. But if we up the price to our budget of £10,000 we can actually get the best model in the range and still have a bit of cash left over.

The top-spec Laureate model with the 89bhp turbocharged petrol engine comes highly recommended with loads of gadgets including alloy wheels, body-coloured everything, Bluetooth connectivity, cruise control and a trip computer.

The Sandero is the most spacious of all the cars on this list with 320 litre boot (actually bigger than the Ford focus) and five doors. This model comes in at a bargain price of £9000 but there is a compromise- quite a big one actually; safety. A three-star Euro NCAP score just isn’t good enough in this day and age.

The Peugeot 108 is a popular, good-looking and economical city car. Some rivals are better to drive, but the Peugeot’s blend of style and value for money make it a strong competitor.

Under the bonnet the Peugeot 108, Citroen C1 and Toyota Aygo are pretty much the same, the major differentiator is the style. In fact, the only reason the Toyota doesn’t feature on this list is because it’s a little more costly than its French competitors and only available with one engine, whereas the Peugeot and the Citroen offer the choice of two petrol engines. Happily, both emissions are so low they are exempt from road tax. Combine this with a low list price and stylish design and the Peugeot makes a great deal of sense. 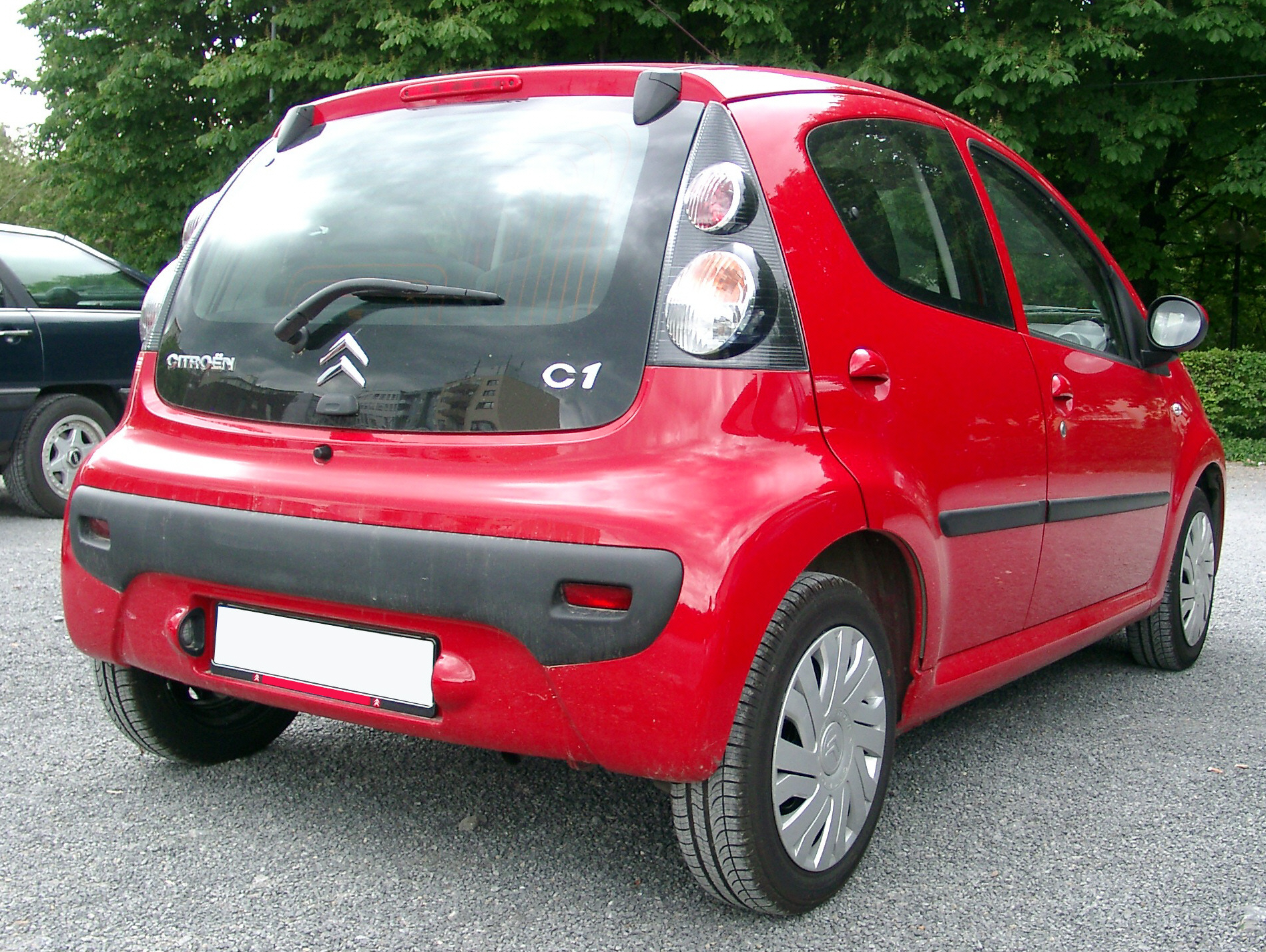 The Citroen C1 is a stylish city car with low running costs and plenty of equipment. Of the French brand’s range it is the smallest car and is built on the same platform as the Toyota Aygo and Peugeot 108. It’s got plenty of French style and lots of customisation options from large round headlights, the choice of three or five-door body styles and the option of a full-length canvas roof.

The Peugeot 108 is pretty much identical and has very similar price ranges so the choice is going to come down to which you prefer the look of and/or the deals available at the time of purchase. The advantage of the Citroen is that there are usually very tempting discounts associated with it meaning it could prove more affordable. Like the 108, it can also be specified as a pseudo-convertible with a sliding fabric roof. Unfortunately, these versions don’t come within our budget.

Vauxhall Viva is a massively cost effective city car option with oodels of practicality and style. Like the Sandero you would be hard pressed to spend more than £10,000 on this baby even with all the add ons. That said the Sandero does win hands down on space both inside and in the boot area.

It has lots of safety equipment so whilst it’s not yet been crash tested by NCAP we expect it’ll do much better than the Dacia’s three star result.

The Viva is not as much fun to drive as some of it’s rivals on the list and the 1.0-litre three-cylinder petrol engine does get a little raucous at higher speeds, but it doesn’t feel completely out of it’s depth

on the motorway. You should expect low running costs, thanks to CO2 emissions of 104g/km, which means an annual road tax bill of £20. The Viva should also return around 60mpg fuel economy on average.

Do I Really Need A Car Amplifier?

Scratch and Dent Insurance – Is It Worth It?

How To Clean Leather Car Seats

All You Need to Know about Car Leasing

How to get the best car finance deals

Should I Lease or Buy a Car